People are becoming increasingly concerned about utilizing popular messaging platforms like Twitter and Instagram, as well as traditional SMS services. They believe that these applications and services aren’t safe enough to protect their personal information. At the same time, we’ve witnessed a surge in interest in the Signal app.

The Signal app is a free application that allows people and groups to transmit encrypted text, picture, audio, and video communication. It may also be used to make secure phone conversations between Signal users on their smartphones. Here’s a brief rundown of what this app is about and why it’s attracting so many new users. 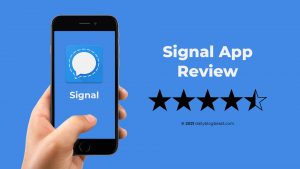 The signal is texting, audio and video calling, and another communication app. It’s cross-platform, free, and open-source, with end-to-end encryption. As a result, it’s a popular choice among users who want more privacy and security.

The Signal app dates back to 2010 when Whisper Systems released two Android apps: TextSecure, which encrypts text communications, and RedPhone, which encrypts voice conversations. The firm was purchased by Twitter in 2011, and the applications were made available as free open-source software.

Moxie Marlinspike, one of Whisper Systems’ founders, left Twitter in 2013. He started a new company, Open Whisper Systems, and kept working on TextSecure and RedPhone. The business started in 2014 that it will integrate the two applications into one and rename it Signal. The Signal Foundation was founded by Marlinspike and WhatsApp co-founder Brian Acton in 2018 to continue the development of the app and to maintain it free and open-source software.

Many WhatsApp users, understandably, are unhappy with the planned shift and have switched to alternative messaging programs like Signal and Telegram.

A signal is accessible for iOS and Android smartphones, as well as Windows, macOS, and Linux-based computers. Developers are encouraged to construct their own clients because the application is open-source.

To offer encrypted end-to-end communication between Signal users, the program leverages its proprietary open-source Signal Protocol. This includes text that has been encrypted.

Group chat capabilities have also been added to the Signal app. Group Administrators can be chosen, and they have the ability to add and delete persons from the group. If you wish to highlight a specific member in a group conversation, @mentions are also supported. Anyone may join a Signal group by sending out group URLs.

Signal’s inventors claim that not only are messages encrypted but that all metadata in those communications is also concealed. In other words, if you have a Signal chat with someone else, it will only be visible to the person who receives your messages.

According to The Verge, the European Commission delivered a memo to its employees in February 2020 declaring that the Signal app was now the “preferred application for public instant messaging.” Jack Dorsey, the creator, and CEO of Twitter is a big backer of Signal. Signal was one of the top 10 most downloaded social applications on iOS in June 2020, according to Vox, in the height of the major worldwide Black Lives Matter movement Protests are common.

The software is used by the US military as well. The 82nd Airborne’s Task Force Devil, which was sent to the Middle East in January 2020, was told to utilize the Signal app on their iPhones, according to MilitaryTimes. One thing appears to be clear: the app grows in popularity as people become increasingly concerned about the privacy, or lack thereof, in traditional messaging applications.

Signal’s end-to-end encryption protects both texts and audio conversations, making it a secure option for everybody. WhatsApp and Telegram both offer encryption, but they each have significant security issues that make them less appealing to security-conscious users.

By being privately owned and funded by Russian IT entrepreneur Pavel Durov, Telegram avoids these difficulties. No, he does not have any connection to the Russian government, before you ask. He really departed the country, and his business is now situated in Dubai.

Finally, Signal is most likely the safest and most secure messaging program available. There’s a reason why it’s used by everyone from journalists to US senators to demonstrators all across the world.

The signal app is catching many users’ interest as it is a safe and secure network for text messages, media sharing, and file sharing. The signal app allows you to communicate with others via text media files and videos with network privacy and security.

The best phones for video gaming